By and With: LASA (Laboratorio Artistico de San Agustin) and its community, the dancers "Level Up" from San Agustin, Jana Pacheco, Raul Paz and Club Real

as part of the 13th Bienal de la Habana

Video Documentation of the project: "If you were on an island"

Friday, 10th of May in the courtyard of Centro Wifredo Lam - performance installations: Isola mojon with the dreamer within, community bench with the Egg 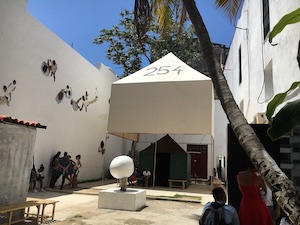 Friday, 10th of May in public space around the Centro Wifredo Lam - Edificio Perro (The Dog - House), the mojones dancers from San Agustin "Level Up" and the WASA mojon with the intranet WASA

Saturday, 11th May in San Agustin - concert with Raul Paz and the guitar group from San Agustin (about 1500 visitors)

LASA10CARNAVAL is the occupation of the center through the periphery, contextual art celebrating its 10th year anniversary at the Centro Wifredo Lam behind the main cathedral of Havanna, but with the context of the suburb where this art was born and thrives: San Agustin, La Lisa, Havanna. The houses grow feet and the street food seller comes along for this performance installation, which is also the presentation of the publication: "If you were on an island". Meet the community of San Agustin on the banco communitario and see if you can convince them that you are worth a part of their book, or be extra brave and enter the realm of the dreamer/creator where the realities meet.
The next day the community has returned home and the contextual art center LASA celebrates with the barrio and a concert by the famous singer Raul Paz. Let the houses dance!
LASA 10 Carnaval
For the closure of the 13th Havana Biennial, LASA decided to expand its territory and is moving to the Wilfredo Lam Centre of Contemporary Art, overtaking Old Havana’s streets and the Cathedral square. Through the organization of LASA 10 Carnaval the Laboratorio Artístico de San Agustín (LASA) proudly celebrated its 10-year anniversary of performing experiences in public spaces. This one-day event consisted in a set of artistic performances and participative installations, accompanied by the presentation of a compilation book which gathers a specialized artist-edition about LASA and Contextual Art in Cuba, as well as an « alternative wifi ». For one day, the Wilfredo Lam Centre of Contemporary Art was turned into a symbolic place; with its own historian, its ambassadors, its monument at the center of the municipal place and a temple.
This carnavalesque journey allowed over thirty « ambassadors » to share experiences and historie(s) of art in San Agustín’s public space - stepping stones for LASA in the last decade. In addition, they gave voice to the edition of “If you were on an island”… which was fully accessible - but only through the mysterious ‘Dreamer’s Island’…

With the kind support of 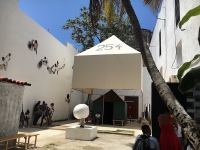 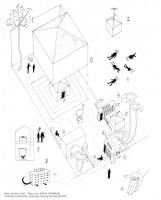 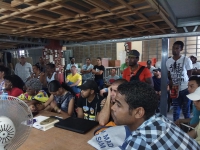