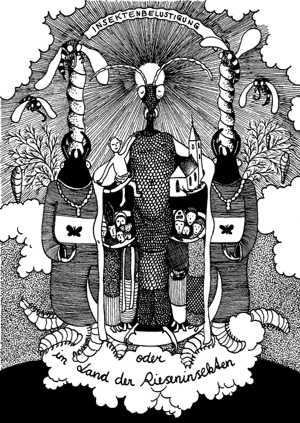 "The performance I witnessed on my first night was located in these shadows that encroach on today. The performance was advertised as Bratislava Fantasy Shopping. That was a fiction. The audience arrived and was bundled into an old transit Van. I do not speak German so the driver translated as well she could. We were going to Bratislava, where things are less expensive than in Vienna. We set off and I was given a small sponge to ensure visibility. We drove around the corner and the bus pulled into a filling station. We were low on gas.
We peered out and saw the staff but they look odd. There was a workman in a bright yellow jacket cleaning leaves. He came over to us and someone cranked the window open and spoke to him. In German. Don’t expect me to translate.

The station staff were half human half insects. "monstrous vermin" as Ka$a might have said!

Our Driver returned but was only half in the van when she was attacked. The worker pulled her out and dragged her around the back. She was uncoiled into the bus and he jumped into the drivers seat. She was not really unconscious but he was really driving like a mad man. He hit the kerb on the way out. We nearly crashed into an oncoming car minutes later. If we were going to Bratislava were would be in a mess when we got there.

Then and there I was excited. This is a new way to experience performance. The City is strange. How crazy is this artist who is driving through the traces of the city?

He stopped and threw the body of the old driver out. He backed up over her to make sure she was dead. He ranted in German and there is no translation only a memory of the performance and his body gesturing. There is no sub title. He stopped at a street vendor and jumped out of the bus with a spray can. What would he do next, this maniac?

He sprayed a figure who turned around. It was an insect with a big beetle like head. It knocked him to the ground and kicked him. The passers by loAoked on. What did they imagine was happening?

This is modern life...it is edgy, violent and fun sometimes.

The bug took over driving, we were going somewhere but it might be back on ourselves who knows...this is a mystic writing pad,....this is life without satnav,?

This is just a trace inscribed on a city, a psycho-geography we have all rehearsed without moving. The bug got road rage. It was angry we had been witness to the attack. The bug drove us back to the fuel station and told us to get out and go inside. There an insect with the head of a fly and the mustache of Adolph Hitler danced for us. Imploring us I imagine the world from the perspective of the bugs. Then one by one we were taken into a tiny anti chamber. One by One we returned as Bugs and danced in the room. The world had become a place of mythology and archives of an excitement beyond translation. This is the archive of moving across virtual and real borders of the imagination and thinking of performance as an erasure of the territory.

This is not an extract from Naked Lunch."
(Mark Waugh about his experience of the performance) 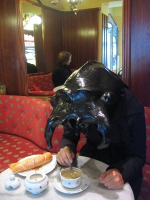 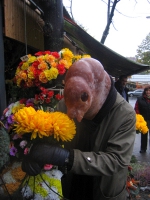 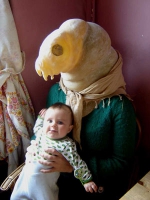